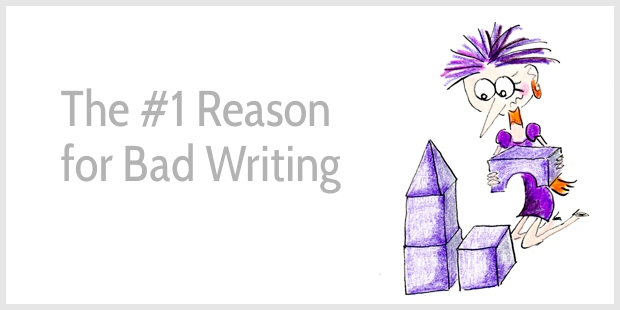 Sometimes, you know, I feel like we’re getting distracted.

We focus on writing beautifully.

We pick our words with care.

We pay attention to punctuation.

We try to avoid grammar and spelling goofs.

But do we forget the basics of writing well?

The #1 reason for bad writing

In his book The Sense of Style, Steven Pinker, a cognitive psychologist and linguist, writes:

The curse of knowledge is the single best explanation I know of why good people write bad prose. It simply doesn’t occur to the writer that her readers don’t know what she knows—that they haven’t mastered the patois of her guild, can’t divine the missing steps that seem too obvious to mention, have no way to visualize a scene that to her is as clear as day.

As far as I know no research exists to determine the reasons for bad writing, and I’m not sure how easy it would be to measure.

Because we all assume too easily that people know what we mean.

What is the curse of knowledge?

Have you ever had a conversation with an expert and wondered, What the hell are they talking about?

I still remember when I had just quit my job and spoke to an accountant about tax regulations and setting up my business. He talked about VAT software, thresholds, tax exemptions, filing dates, and he spoke in such general terms that I struggled to keep up and didn’t understand how his advice applied to my situation.

It’s called the curse of knowledge.

I used to think the curse of knowledge was something that happened to experts only. But in a way, as communicators, we all act as experts. We have ideas we want to share, and we know something about those ideas that our readers or listeners don’t know.

And that’s where ambiguity and misunderstandings sneak in.

It can happen to all of us.

What science says about the curse of knowledge

In their book Made to Stick, Chip and Dan Heath describe a study in 1990 by Elizabeth Newton.

Newton divided people into tappers and listeners. The tappers would tap out a song and the listeners would have to guess what song it was. This research earned her a PhD in psychology at Stanford University.

After tapping a song, the tappers were asked how many of the listeners would guess the song right. The tappers were moderately confident. They thought that one in two songs would be guessed correctly.

Only 1 in 40 songs was guessed correctly.

As writers and speakers, we’re all tappers. We’re all overly confident that we’ll get our message across. But the truth is that we often fail.

As communicators, we’re often overly confident that listeners and readers will know what we mean. But our messages may be hidden between the lines. 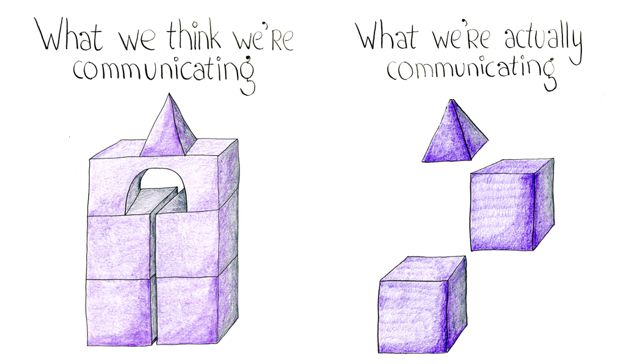 How to avoid the curse of knowledge

The first way to avoid the curse of knowledge is to keep communicating with your audience and encourage feedback.

I love it when I get questions about a blog post. Sometimes, I left gaps in my communication. At other times, a reader has thought through a problem better than me.

To avoid the curse of knowledge, it’s a good idea to avoid gobbledygook and use plain language instead.

For instance, in an article on the benefits of analogies, The School of Life explains what an analogy is and gives examples:

Analogy works by picking out a feature that is clear and obvious in one area and importing it into another field that happens to be more confusing and intangible. Take the analogical phrase ‘papering over the cracks’ – commonly used to suggest a shoddy, incomplete, lazy or dishonest manoeuvre. It is easy to develop a vivid image in our minds of how putting up wallpaper can hide multiple defects in plasterwork. But it might be much harder to see that, in a relationship, going on an expensive holiday won’t do anything to address the daily conflicts of life together or that, at work, moving to fancy offices won’t alter the deep problems with the quality of the management team.

Leaving a draft for one or more days can help you see the gaps in your writing. Read your draft slowly and try not to read between the lines. What’s actually written? What does each sentence communicate? And what’s missing?

A fab example of clear communication

Here’s a challenge for you …

How would you explain the idea of socioeconomic unfairness?

Socioeconomic unfairness means that it’s expensive to be poor. When you don’t have much money, you can only buy lower quality products at a lower price but such products don’t last very long. So you have to replace them more quickly.

In the fantasy novel Men at Arms by Terry Pratchett, Captain Samuel Vines gives a fab explanation of socioeconomic unfairness:

Take boots, for example. He earned thirty-eight dollars a month plus allowances. A really good pair of leather boots cost fifty dollars. But an affordable pair of boots, which were sort of okay for a season or two and then leaked like hell when the cardboard gave out, cost about ten dollars. (…)

But the thing was that good boots lasted for years and years. A man who could afford fifty dollars had a pair of boots that’d still be keeping his feet dry in ten years’ time, while a poor man who could only afford cheap boots would have spent a hundred dollars on boots in the same time and would still have wet feet.

Isn’t that a splendid way to explain why it’s expensive to be poor?

It works so well because it reads like a story, we can visualize the poor man spending money each year on a new pair of affordable boots and still having wet feet. In ten years, the rich man pays 50 dollars while the poor man pays 100 dollars for inferior boots.

The story is concrete. It’s about boots. But even though the example only mentions boots, we can easily imagine that similar calculations works for other items, too, like clothing, furniture, or household appliances.

To make your ideas clear to anyone, use concrete examples. It’ll make your writing more entertaining, too.

The curse of knowledge turns up everywhere

The curse of knowledge can strike at any time for any type of writing.

When writing a how-to blog post or any other instructions, we may skip a step or two because they seem obvious to us. But these steps might not be obvious to our readers.

And when writing a sales page, we may forget to translate features into benefits because the benefits seem obvious to us.

However, the benefits may not be obvious to your readers. For instance:

This bike has 24 gears, disc brakes, and an ergonomic saddle.

Much clearer text with benefits:

This bike has 24 gears, so whether you go uphill, downhill, or cycling on a flat surface you’ll be able to find the right gear. The disc brakes are safe and will break well, even when it rains and when roads get muddy. And you won’t get a sore bum because the ergonomic saddle remains comfortable after hours of cycling.

Further reading: How to translate features into benefits

When explaining a concept or idea, you may be inclined to keep your explanation concise.

But conciseness is a curse if your explanation remains abstract.

Let’s lift the curse of knowledge

To write with more clarity, it’s best to assume our readers know nothing.

That doesn’t mean we dumb our writing down. It means that we don’t skip any steps, we avoid complicated language, and we explain abstract concepts with concrete examples.

And even when we’re careful to explain each step clearly, we don’t adopt a condescending tone.

Because we also assume our reader is as smart as we are, perhaps even smarter.

Recommended reading on the curse of knowledge:

How to write clearly: A simple 4-step method
Abstract vs concrete language: How to tell better stories
The Zoom-In-Zoom-Out technique for better explanations