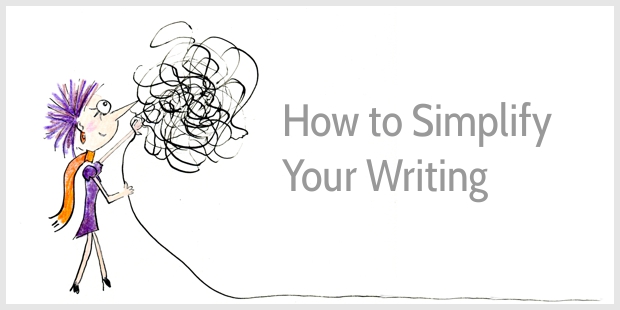 Let me admit it …

When a text is confusing or complicated, I quickly get distracted.

I do love learning new things.

But I’m too lazy to decipher a writer’s ideas.

How can writers simplify their writing so they can keep impatient readers like me captivated?

Fuzzy thinking hides in long sentences and in paragraphs

So, to avoid fuzzy writing try this practice:

This practice forces you to disentangle your thoughts. There’s no hiding.

Sentence by sentence, you lay out your argument.

Shall we look at an example?

Mailchimp offers email marketing software, and the Help section on its website explains the difference between hard and soft bounces.

Below follows part of that explanation—I’ve changed the paragraphs so each sentence stands on its own and I’ve numbered the sentences:

(1) When an email cannot be delivered to an email server, it’s called a bounce. (…)

(3) A hard bounce indicates a permanent reason an email cannot be delivered.

(4) In most cases, bounced email addresses are cleaned from your audience automatically and immediately.

(5) Cleaned addresses will be excluded from all future campaign sends.

(6) Here are some common reasons an email may hard bounce.

Each sentence above furthers the explanation on bounces, just one step at a time:

The explanation is easy to follow because each sentence communicates just one piece of information. And then the next sentence takes that explanation one step further, and so forth.

Readers get exactly the information they need. Nothing more. Nothing less.

David Allen Green is a lawyer who commentates on UK law and policy issues.

I enjoy reading his blog because he makes complicated issues—such as Brexit policies and constitutional law—understandable, even to a lay reader like me.

Green consistently writes one-sentence paragraphs; and each sentence is clear and simple. Here’s an example from a blog post about animal rights:

Once I did not think animals should have rights.

To the extent I had any view on the subject, my view was that ‘animals don’t have rights, but humans have responsibilities’.

After all: how could an animal have rights if an animal could not enforce them?

The more I thought about it, the more that view just did not add up.

Lots of humans have rights that have to be enforced on their behalf – minors and the incapacitated, for example.

Even things that do not actually exist in physical form have rights and legal personality – corporations for example.

And so the fact that animals could not enforce their own rights was not a reason to deny them rights.

Then, as I looked at animal welfare law in the United Kingdom – a complex sprawling mess of legislation with arbitrary distinctions between species and various levels of protection (and lack of protection), and with varying degrees of enforcement (and lack of enforcement), it seemed to me that it would be far better if the whole thing was replaced with a single Animals Act (like the Children Act).

And if so, then the basis of the legislation should be that all animals have rights – not just the lucky ones.

Have you noticed how each sentence matters?

How each sentence gives one extra piece of information, expanding the argument?

David Allen Green explains why he writes in one-sentence paragraphs:

The more sentences you have in a paragraph, the weaker the proposition

And my one sentence-paragraph style seeks to avoid that

Some people think that using difficult words and complicated sentences is a sign of superior intelligence.

But Green shows that the opposite is true.

By simplifying his writing, he shows his clarity of thinking, and he helps readers follow his thought process. He makes complicated subjects easy to understand, and that’s surely a sign of intelligence.

You don’t have to publish your work in one-sentence paragraphs, like David Allen Green does. But it’s a good practice to help clarify your thinking.

How to disentangle your thinking

Shall we look at the process of turning fuzzy thinking into simple writing?

Here’s a fuzzy description of a consultant:

John brings energy to his work fueled by the possibility of what could be paired with an ability to turn ideas into action, notice strengths and potential in others and elevate these characteristics even more.

The first problem with the sentence above is that it has too many ideas. The second problem is that each idea remains abstract. Can you picture John? Can you imagine how an organization would benefit from his work? Nope, me neither.

To disentangle this sentence:

So, the first step is to break the sentence up:

John brings energy to his work.

He is fueled by the possibility of what could be.

And he pairs that sense of possibility with an ability to turn ideas into action.

He sees strengths and potential in others.

And he elevates these characteristics even more.

Next, comes the most difficult step: Scrap the sentences that don’t matter and communicate the essence of your message succinctly.

It can help to highlight the most important phrases first. I highlight: Energy, a sense of possibility, seeing potential in people, turning ideas into action. With a little bit of playing and rephrasing, I get to the essence of the message in two sentences:

John sees possibility everywhere and potential in everyone.

His energy helps your team turn ideas into action.

But it’s still a little abstract, so an example can help make it more vivid:

John sees possibility everywhere and potential in everyone. His energy helps your team turn ideas into action.

For instance, when Covid hit, sales at the Brilliant Retailer slumped. The marketing budget shrunk, and the marketing team felt under pressure and deflated.

Mid 2020, John helped organize 3 online brainstorm sessions. The team came up with low-cost marketing ideas, and sales increased by 7.8% in 2021.

Writing is often a process of subtraction and expansion.

First, pare down writing to its essence.

Next, expand with examples and details to make your message more vivid.

A simple text is almost effortless to read …

And it can feel like the words have just flowed out of the writer onto the paper.

But that’s not how writing simply works.

Writing clearly and simply is hard work. But you know what’s so wonderful about it?

And readers will love how you make them feel smarter.

Recommended reading on simplifying your writing: