Agood opening line sets the tone and invites readers into your story, making them eager to read on.

This article discusses how to write an opening sentence:

How to write an opening sentence 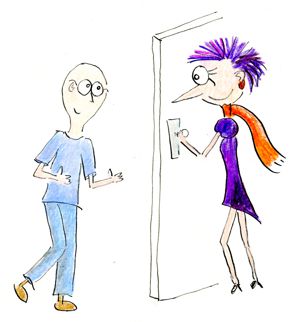 Can I skip the opening sentence for this post?

Let’s say you skip reading the first few sentences and start with the fourth?

I don’t like the pressure of writing a first sentence.

What if I fail to engage readers? What if I’m boring them? What if I’ve wasted my time on this article because my first line sucks?

The task of writing a catchy first sentence can paralyze even the most acclaimed writers. In an interview with the Atlantic, Stephen King admits he can spend months, or even years, on writing the opening lines for a new book.

As business writers, we don’t have the luxury of time. We have other things to do than worrying about one line of text.

So what can we do?

Let me share with you a trick for writing a first sentence super-fast. But first, let’s define what a good opening line is.

What makes an opening sentence good?

This is how the novel “Nervous Conditions” by Tsitsi Dangarembga starts:

I was not sorry when my brother died.

Why is this sentence good?

It entices you to read on.

That first sentence creates drama because it instantly raises two compelling questions in readers’ minds: Why did the brother die? And why was the author not sorry? A reader reads on because he wants to find out the answers to these two questions.

An opening line should invite the reader to begin the story. It should say: Listen. Come in here. You want to know about this.

One of the most famous opening sentences

This is how “The Catcher in the Rye” by J.D. Salinger starts:

If you really want to hear about it, the first thing you’ll probably want to know is where I was born, and what my lousy childhood was like, and how my parents were occupied and all before they had me, and all that David Copperfield kind of crap, but I don’t feel like going into it, if you want to know the truth.

Is such a long sentence a good idea?

Ben Blatt analyzed what makes a good novel great, and he also reviewed first sentences. His conclusions are not clear cut, as he summarizes in his book “Nabokov’s Favorite Word is Mauve:”

But when writing for the web, we need to remember our readers. They’re not curled up on a comfy sofa with a book and a glass of Rioja. They’re hurrying across the web, searching for interesting articles to read and share. Who has the patience to start reading a block of text?

Instead of following J.D. Salinger’s 63-word mammoth sentence, take your cue from Toni Morrison, the master of short first sentences, like this one from “Tar Baby:”

He believed he was safe.

They shoot the white girl first.

From “God Help the Child:”

It’s not my fault.

Each of these sentences makes you curious to read on.

Ben Blatt quotes the opening line of the book “Paul Clifford” by Edward Bulwer-Lytton as one of the most ridiculed opening lines ever:

It was a dark and stormy night; the rain fell in torrents, except at occasional intervals, when it was checked by a violent gust of wind which swept up the streets (for it is in London that our scene lies), rattling along the house-tops, and fiercely agitating the scanty flame of the lamps that struggled against the darkness.

Not only is that sentence awfully long, its worst crime is that nothing happens. Nothing grabs attention. Nothing makes me curious. It’s simply a description of the weather. So what?

Of course, in business we rarely write about the weather, but you may have come across similar opening lines that fail to whet your appetite for reading more. For instance:

Many ways exist to choose your words.

As you know, Rome wasn’t built in one day.

In business, you have to take risks.

The above opening lines may be short, but they’re obvious statements, killing readers’ interest. There’s no incentive to read on.

Getting nervous about writing a good first sentence?

No need for nerves, when you know this blog writing trick …

Unlike novels, a blog post is often a conversation with our readers. And what easier way to engage readers than asking them a question?

Do you hear that nagging voice, too? (source)

Do you ever feel a pang of envy? (source)

Has it happened to you, too? (source)

In a face-to-face meeting, you often start a conversation with a question, like: Cup of tea? How did your meeting go? Or: How’s business?

Why not do the same in your writing?

So, no need to search for it anxiously.

Instead, remember your reader.

How can you engage him? How can you make him read your first sentence? And then the next?

A good writer draws a reader in, and doesn’t let him go until the last word.

The first sentence of How to Kidnap the Rich by Rahul Raina:

The first kidnapping wasn’t my fault.

This sentence conjures up so many questions that I couldn’t help myself to read on. Who was kidnapped? How was the protagonist involved? What happened after the first kidnapping? And how and why were the subsequent kidnappings his fault? All these questions made me read on.

This is the opening line from Silver Sparrow by Tayari Jones:

My father, James Witherspoon, is a bigamist.

Do you also want to know more? Why was her father a bigamist? How did the protagonist find out her father was a bigamist? What happened with the two marriages? Were their children in both marriages?

Sometimes, a long first sentence is great. like this one from The Vanishing Half by Brit Bennett:

The morning one of the lost twins returned to Mallard, Lou LeBon ran to the diner to break the news, and even now, many years later, everyone remembers the shock of sweaty Lou pushing through the glass doors, chest heaving, neckline darkened with his own effort.

Why were the twins lost? Why did one return? And why did everyone remember?

How to write cliffhanger sentences
How to write a sparkling sentence
11 fab sentence examples: Why are these so good?