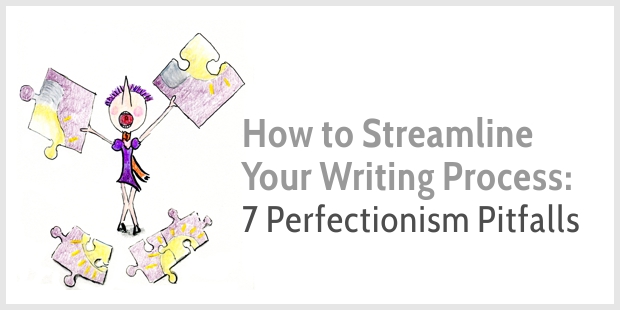 “Howard, stop being a perfectionist,” his writing coach had said.

Howard leafs through his notebook with blog post ideas. For once, he wants to start his next article early.

Howard gets up to brew a cup of coffee. He can’t find the right idea for his next post, and without the right idea, he’s wasting his time. Isn’t he?

In the kitchen, he brews his coffee, and empties the dishwasher. Then he trudges back to his little office upstairs.

While slurping his caffeine shot, he leafs through his ideas again. Why does every idea seem crap? Then, he remembers what his coach said: “Perfectionism stops you from trying. Start somewhere, and then improve. You can’t figure it all out in your mind first.”

Should he pick a half-decent idea and see whether he can turn it into a good blog post?

And when does perfectionism become an unhealthy habit, sabotaging our writing process and spoiling our fun?

I used to think perfectionism meant being afraid to hit “publish”—as if perfectionism only blocks us at the very last stage of writing.

Want to know how to stop perfectionism slowing you down? And want to make your writing process smoother, and faster?

Grab the embed code below to display the infographic on your website:

How to Streamline Your Writing Process, courtesy of Henneke at Enchanting Marketing

“The tools to master the writing process are helping me write and get unstuck faster.”
~ Isabel

Recommended reading on the writing process:

The magic of shitty first drafts
5-step revision: How to turn shitty drafts into shiny content
How to write faster [infographic]