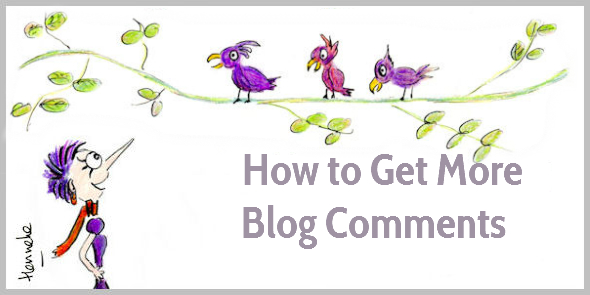 When I launched my blog in November 2012, I was a nervous wreck.

I worried about being a lonely voice whispering in the vast ocean of pixels.

Do you feel the same?

Do you get frustrated by a lack of comments?

I had built a list of about 300 email subscribers.

But still I was worried.

Comments are, of course, social proof

Boatloads of comments suggest a blog is popular, or that at least a specific blog post resonated with an audience.

After last week’s commenting rush, I realized a specific type of posts get more comments. These are my top three:

While the majority of my blog posts are about blogging and copywriting, the few posts about struggling with running my own business seem to resonate most.

You can try several other tactics to get more comments:

The tactics above all work.

But how much effort should you put into generating more comments?

Let’s look at a quick comparison between my two latest posts:

Here’s How to Find the Courage to Choose Your Own Business Path
Page views in the first week: 2,741
Total comments: 103
Comments excluding my replies: 53
% of comments / page views: 1.9%
Number of signups within 7 days: 4*

*Signups to the snackable course via the top banner only

You might have thought that the post about finding the courage to choose your own business path was more successful, because it received a high number of comments.

But when you look at the figures as a rational business person, the post about writing sparkling sentences is clearly more successful because not only did it receive 29% more views, it also generated over 4 times as many subscribers.

Blog posts with copywriting tips may not get the most comments, but they consistently get most clicks from my emails.

The tricky truth about comments

As a business owner, I can’t measure business success by the number of comments a post receives. Most of the people buying my courses, for instance, have never commented on my blog prior to purchasing the course.

But for me, blogging isn’t purely about the economics of running a business.

Of course, my blog drives my business growth. My blog allows me to make a living, to sell my course and my books.

But blogging is about much more. It’s about having a voice, a creative outlet. Blogging is about connecting with readers. About inspiring people and making a difference.

Each comment is an opportunity to learn more about you, a chance to engage and have a conversation.

And that conversation is the most rewarding part of blogging.

How to engage and delight readers (yes, really!)
How to write conversationally
How to captivate readers with personal stories (even if you’re shy)