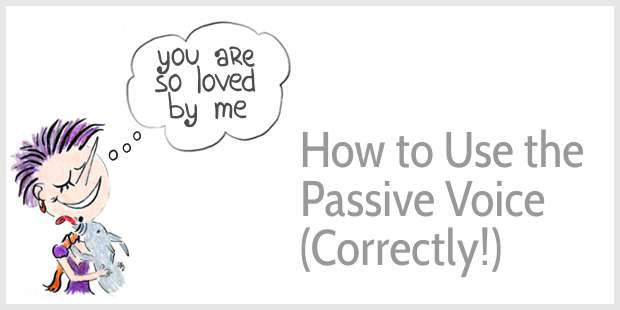 Most writing teachers tell you to avoid the passive voice.

I used to say the same.

But after studying good writing for several years, I’ve changed my view.

Sometimes, the passive voice works better than the active.

What is the passive voice?

The passive voice explains what’s done to someone rather than what they do.

For instance, this is passive:

Henrietta was hit by a ball on her head.

And this is active:

Henrietta threw a ball through the window.

You see the difference?

The passive voice uses a form of the verb to be or to get. Often the word by is used to indicate who (or what) the actor is but not always. So:

Passive:
A mistake was made.
Active:
Henrietta made a mistake.

If you pay attention to everyday conversations, you’ll note that most sentences use the active voice.

When to use the passive voice

Below follow 4 guidelines when the passive voice may be preferable to the active voice.

1. The emphasis is on what’s done to someone

What’s more important—what someone did or what was done to them?

Here’s the first sentence from the chapter Neck from Maggie O’Farrell’s book I Am, I Am, I Am:

When I am seized suddenly and roughly from behind, my first thought is that it’s someone I know.

The above sentence starts with the passive voice: I am seized.

The story is about one of Maggie O’Farrell’s brushes with death. She describes her experience of a robbery—what was done to her:

There is a machete being held to my throat.

The story is less about the robber and what he’s doing; the story is about O’Farrell and what is done to her. That’s why the passive voice works.

If I were a baby who had been bathed, fed, sung to, read to, and lovingly shielded from the suffering and cruelty of this world all day at great personal cost to my caretakers, I would simply go to fucking sleep.

There’s a whole string of passive voices: The baby had been bathed, fed, sung to, read to, and shielded. This sentence is not about the parents and the care they give; the spotlight is on the baby and how much care it receives. That’s why the passive voice works.

In his book Gratitude, Oliver Sacks reflects on his life:

I cannot pretend I am without fear. But my predominant feeling is one of gratitude. I have loved and been loved; I have been given much and I have given something in return; I have read and traveled and thought and written. I have had an intercourse with the world, the special intercourse of writers and readers.

Did you spot the two passive voices?

The passive voice works here, too, because it’s about what’s been done to Oliver Sacks. But the choice of passive voice is also about rhythm. Try rephrasing, and not only does the meaning change subtly, you also mess up the rhythm. You’ll notice the difference when you read the two versions aloud:

I cannot pretend I am without fear. But my predominant feeling is one of gratitude. I have loved and people have loved me; people have given me much and I have given something in return; I have read and traveled and thought and written. I have had an intercourse with the world, the special intercourse of writers and readers.

It’s up to a writer to decide what he or she wants to express. Is something done to someone? Or is someone doing something? And how does the rhythm change if you switch between passive and active?

You may have seen a sticker on the back of a van with this text:

No tools left in this vehicle overnight.

That’s the passive voice—the word are is left out: No tools are left overnight.

I assume it’s the owner of the van.

But does it matter who took the tools out of the van?

No. What matters is the van is now empty so if you thought about breaking into the van, don’t bother—there’s nothing of value inside.

Because the actor doesn’t matter, it’s okay to use the passive voice. Moreover, if you rephrase the sentence to include the owner of the vehicle, it becomes cumbersome:

Mr. Carpenter has left no tools in this vehicle overnight.

Not only is the latter version longer, the key message (NO TOOLS!) gets buried in the middle of that sentence—the part that gets the least attention.

Writers sometimes choose the passive voice not because the actor doesn’t matter but because they want to hide who the actor is. This is a bad practice.

For instance, politicians and corporate executives use the passive voice to promote vagueness and avoid blame:

Mistakes were made.
The business review was completed.
It’s been decided to downsize the company.

But who made those mistakes? Who completed the review? Who decided?

These versions use the active voice:

I made a mistake when I authorized this new refund policy, and I apologize for that.

My team has completed this business review.

I’ve decided to downsize the company.

Don’t use the passive voice to be vague and hide who the actor is.

Writing for the web?

To help scanners make sense of your web page, put key words at the start.

Usability research shows that when people are scanning a web page, they focus on the first couple of words of headlines, subheads, summaries, captions, and bullet points to establish what the page is about so they can decide whether to read more or to click away.

For instance, at the top of some blog posts, I provide a short summary to quickly communicate the essence of an article. I summarize my article on clear and concise sentences like this:

Clear and concise sentences are sculpted rather than just written.

The only reason for making that sentence passive is that I want to have the words clear and concise at the start because that’s what many people google before they arrive at the page.

Web readers are impatient. To capture them quickly, you may need to use the passive voice so you can frontload key phrases.

So, when possible, put the most meaningful words at the start and at the end of sentence. You may do this already naturally.

In his book Murder Your Darlings, Roy Peter Clark quotes a line from a speech by Michelle Obama; it ends with the most meaningful word:

I live in a house that was built by slaves.

If you try to rearrange that sentence to make it active, it ends up weaker:

I live in a house that slaves have built.

So, a writer or speaker can choose to use the passive voice. Deliberately.

Perhaps they want to stress what’s done to someone. Or the actor doesn’t matter. Or they choose the passive voice to put key words at the start or end of a sentence.

How to choose between active and passive voice

Let’s look at one more example—a fab sentence which uses both the active and passive voice.

Hadley Freeman wrote the following about Salman Rushdie in The Guardian:

[Salman Rushdie] will always be best known, to his chagrin, not for something he did, but for something that was done to him, when the Ayatollah Khomeini issued a fatwa against him in 1989.

The actor in this case is the general public and Freeman has chosen not to specify that as most readers will assume this. She makes Salman Rushdie the focal point of the sentence.

Here’s the second part of the sentence:

… not for something he did …

That’s the active voice: Rushdie did something (namely, he wrote books). Rushdie is the actor in this part.

And Freeman contrasts that active voice with the passive in the next part:

… but for something that was done to him …

Hadley uses the passive voice to stress that Salman Rushdie was the passive recipient of the fatwa. It was done to him.

Lastly, the sentence turns to the active voice again:

… when the Ayatollah Khomeini issued a fatwa against him.

The main reason to use the passive rather than the active voice is to stress that something was done to someone.

You can also use the passive voice to frontload your key message or to end with a bang, or because it doesn’t matter who the actor is.

If in doubt, go for the active voice because it’s more dynamic and less writerly.

You’re the writer. You choose how to express your ideas. 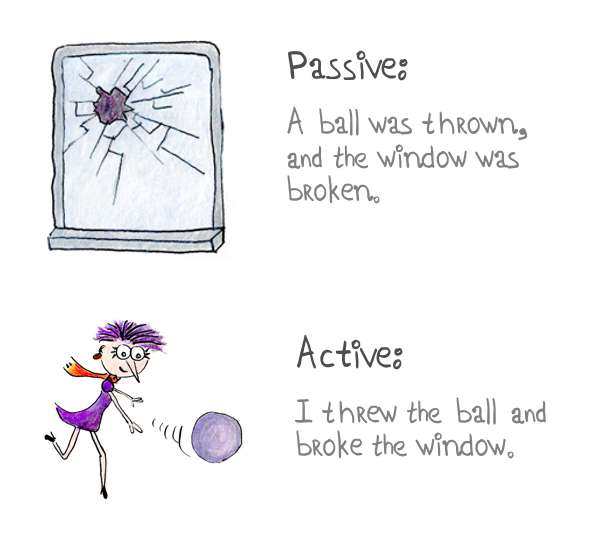