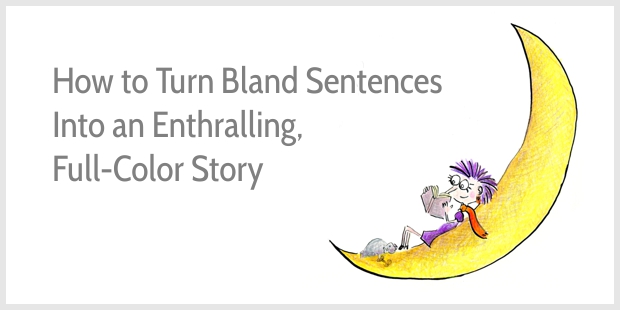 She purses her lips, and wonders, Why does the story feel flat? Why does it seem to drag on? Where has the drama gone? Is it too long?

Okay, she thinks. Time to cut down my story.

She removes a few sentences here, scraps a whole paragraph there, shortens another sentence. After crossing out words for over 20 minutes, she’s reduced her word count almost by half. Phew. With a sigh of relief, she treats herself to Jasmine tea with carrot cake.

But, hey, what happened to her story?

It seems even worse than before.

Sometimes stories are too short rather than too long

To let readers experience your story, show rather than tell:

Telling is: She was tired.

Showing is: She yawned.

Telling is: She is hungry.

Showing is: Her stomach rumbles.

And the best way to learn the difference between showing and telling?

Firstly, study how authors use this technique in their writing. Start with the examples below. And secondly, practice.

You can use the 9 examples below for practice:

To demonstrate someone’s emotions, think about what somebody does when they feel angry, hungover, or happy.

How can you see their anger in their movements? What does an angry face look like? What are they muttering or screaming? What would they say when thinking aloud?

In his book Behold the Dreamers, Imbolo Mbue shows Jende is nervous:

His throat went dry. His palms moistened. Unable to reach for his handkerchief in the packed downtown subway, he wiped both palms on his pants.

Can you hear the internal monologue droning on in Jende’s mind?

After the monologue comes a tactile description of his throat going dry and his palms moistening, and then you can picture Jende wiping his palms on his pants. Vivid?

Example #2: Kate feels lonely, despite sharing a house with four other people

In her book The Lido, Libby Page demonstrates Kate’s loneliness as follows:

Kate lives in a house-share with four other people – two students and two who do something but she’s not quite sure what. They come in at different times and shut their bedroom doors, occasionally passing on the way to the (one) bathroom.

They are people that she has heard grunting in the heat of sex (thin walls) and whose pubic hairs she has untangled from the shower plug, but she doesn’t know where they all came from before arriving here in this house, or what their favourite films are. She doesn’t really know them at all. And they certainly don’t know her. But what is there to know really?

Can you feel Kate’s loneliness, symbolized by the lack of interaction?

Example #3: Cheryl has started the Pacific Crest Trail but she fears she can’t do this

In her book Wild: A Journey from Lost to Found, Cheryl Strayed shows her fear as follows:

Within forty minutes, the voice inside my head was screaming, What have I gotten myself into? I tried to ignore it, to hum as I hiked, though humming proved too difficult to do while also panting and moaning in agony and trying to remain hunched in that remotely upright position while also propelling myself forward when I felt like a building with legs.

So then I tried to simply concentrate on what I heard—my feet thudding against the dry and rocky trail, the brittle leaves and branches of the low-lying bushes I passed clattering in the hot wind—but it could not be done.

The clamor of What have I gotten myself into? was a mighty shout. It could not be drowned out. The only possible distraction was my vigilant search for rattlesnakes. I expected one around every bend, ready to strike. The landscape was made for them, it seemed. And also for mountain lions and wilderness-savvy serial killers.

Note how many sensory words are used in the above paragraph, like screaming, humming, panting, thudding, clattering, clamor, drowning out. As a reader, you can almost hear Cheryl’s fight with her fears.

Emotions like fear, nervousness, and loneliness remain abstract unless we show readers how such emotions manifest themselves in body language, dialogues, or actions.

Instead of telling readers you’re happy, can readers see you’re grinning from ear to ear?

Show Don’t Tell Examples: How to show a person’s passion

You know I’m passionate about writing, don’t you?

But have I ever told you that?

Nope, I show my passion by sharing my best writing tips and tricks so you can tell better stories and share your ideas with gusto.

What are you passionate about? And which actions can prove your passion?

Get inspired by the 3 examples below …

Example #4: Frank, a music shop owner, is passionate about sharing music with people, even strangers

In her book The Music Shop, Rachel Joyce demonstrates Frank’s passion as follows:

‘We had another shoplifter today,’ [Frank] said, apropos of not very much at all. ‘First he flipped because we had no CDs. Then he asked to look at a record and made a run for it.’

‘What was it this time?’

(…) Frank had done the sort of thing he always did. He’d grabbed his old suede jacket and loped after the young man until he caught him at the bus stop. (What kind of thief waited for the number 11?)

He’d said, between deep breaths, that he would call the police unless the lad came back and tried something new in the listening booth. He could keep the Genesis record if he wanted the thing so much, though it broke Frank’s heart that he was nicking the wrong one – their early stuff was tons better.

He could have the album for nothing, and even the sleeve; ‘so long as you try “Fingal’s Cave”. If you like Genesis, trust me. You’ll love Mendelssohn.’

Isn’t it amazing how such a short story can characterize one person? It feels like you know Frank a little already.

In her book The Great Passage, Shion Miura describes Araki’s love for dictionaries as follows:

Araki began saving up his allowance for trips to the used bookstore. When a new edition of a dictionary came out, a copy of the earlier edition could usually be purchased on the cheap.

Little by little he collected a variety of dictionaries from different publishers and compared them. Some were tattered and worn. Others had annotations and underlining in red. Old dictionaries bore signs of the linguistic struggles of compiler and user alike.

Can you picture the dictionaries in Araki’s room?

In his book Kitchens of the Great Midwest, J. Ryan Stradal demonstrates a passion for food as follows:

In the same fashion that a musical parent may curate their child’s exposure to certain songs, Lars had spent weeks plotting a menu for his baby daughter’s first months:

Week One NO TEETH, SO:

Can you picture Lars writing down the menu, while licking his lips?

And, thinking about your own passions, which actions describe them best?

Don’t be fooled into thinking that action is always telling rather than showing.

Some action is so vague a reader can’t really imagine what’s happening.

As a writer it’s your task to help readers experience your story. So, give them enough vivid details to let a movie play in their mind.

In her book Little Fires Everywhere, by Celeste Ng paints a vivid image of the town tour:

They went to Fernway, his old elementary school, where they clambered up the slide and shimmied up the pole and tumbled from the catwalk to the wood chips below. He took Pearl to Draeger’s for hot fudge sundaes.

At Horseshoe Lake, they climbed trees like children, throwing stale chunks of bread to the ducks bobbing below.

In Yours Truly, the local diner, they sat in a high-backed wooden booth and ate fries smothered in cheese and bacon and fed quarters into the jukebox to play “Great Balls of Fire” and “Hey Jude.”

Much more vivid than an abstract tour of the town, right?

In the thriller Die Trying, Lee Child slows down the action to heighten the drama:

First thing out of the barrel of Reacher’s Barrett was a blast of hot gas. The powder in the cartridge exploded in a fraction of a millionth of a second and expanded to a superheated bubble.

That bubble of gas hurled the bullet down the barrel and forced ahead of it and around it to explode out into the atmosphere. Most of it was smashed sideways by the muzzle brake in a perfectly balanced radial pattern, like a donut, so that the recoil moved the barrel straight back against Reacher’s shoulder without deflecting it either sideways or up or down.

Meanwhile, behind it, the bullet was starting to spin inside the barrel as the rifling grooves grabbed at it.

Then the gas ahead of the bullet was heating the oxygen in the air to the point where the air caught fire. There was a brief flash of flame and the bullet burst out through the exact center of it, spearing through the burned air at nineteen hundred miles an hour.

The bullet took five-hundredths of a second to cross the Bastion, by which time the sound of its shot had just passed Reacher’s ears and cleared the ridge of the roof.

That’s 246 words to describe less than one-hundredth of a second.

Lee Child is a master in pacing his stories. He keeps us reading for pages and pages before he at last reveals whether the bullet hits someone or not.

Remember, slow down the action to heighten the drama.

Example #9: Harold and his brother Raymond didn’t know what to say to Maggie

Even when nothing seems to happen, you can still paint a vivid picture as Kent Haruf does in Plainsong:

They were dumbfounded. They looked at her, regarding her as if she might be dangerous. Then they peered into the palms of their thick callused hands spread out before them on the kitchen table and lastly they looked out the window toward the leafless and stunted elm trees.

Can you imagine how you’d film this scene?

She’s sitting at her desk, sipping a cup of coffee.

She switches on her laptop, wipes the sleep from her right eye, and briefly massages her temples. Then she opens your email and clicks to read your blog post.

A lightbulb goes off in her mind and she whizzes off a quick email to thank you. She’s excited to implement your advice.

When to show and when to tell

Telling is brief and factual.

Showing, in contrast, uses more words to direct a mental movie in your readers’ minds.

When you show rather than tell, your reader becomes an active participant in your story.

So, race through the less important parts of your story.

And dramatize the key parts, with detailed and vivid descriptions. 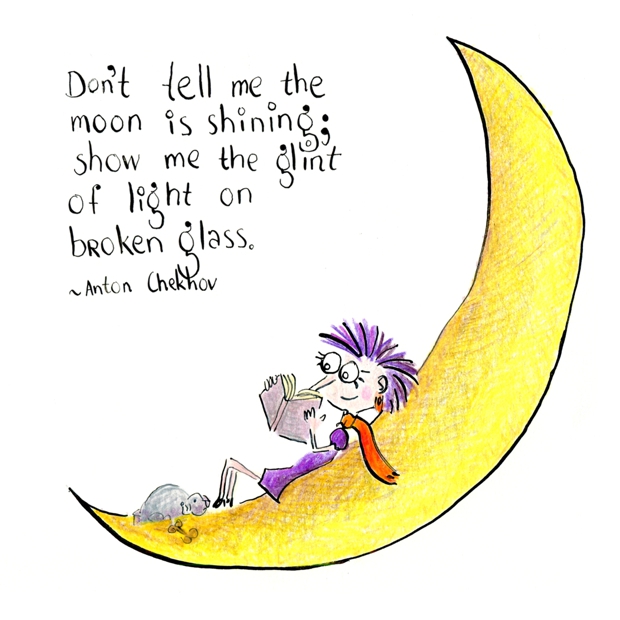 “Show and tell” in business writing
The magic of sensory language
351+ strong verbs to make your writing pop, fizz, and sparkle

When you feel stuck …