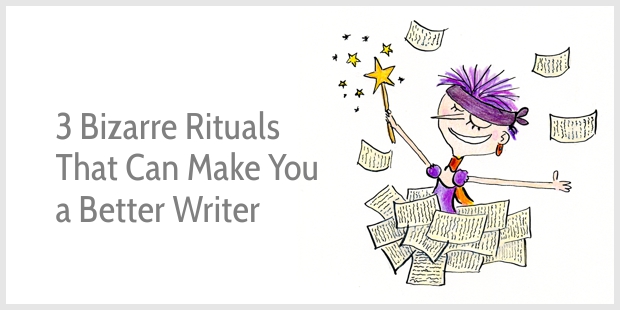 Have you ever wondered whether there’s a secret to writing more and better?

I’ve been studying the habits of famous and less famous writers for years.

And I’ve come across a lot of nonsense.

As if we only have to emulate the writing rituals of some famous writer, and we’d write a bestseller, too.

Unfortunately, life is a little more complicated than that. We’re all different.

But in the quagmire of crazy rituals, I’ve found a couple that have merit. Below follow 3 weird rituals that might help you become a faster, better, and more prolific writer.

Typing blindfolded may sound like a crazy idea, but it’s exactly what novelist Kent Haruf used to do.

As William Yardley writes in Haruf’s obituary in the New York Times:

Kent Haruf pulled a wool cap over his eyes when he sat down at his manual typewriter each morning so he could “write blind,” fully immersing himself in the fictitious small town in eastern Colorado where he set a series of quiet, acclaimed novels, including “Plainsong.”

I can see two huge benefits to typing blindly.

Firstly, when you can’t see what you’re typing, you can’t go back and edit your sentences. So, this strange ritual may help silence your inner critic and get your ideas onto paper faster—without faffing about minor details such as word choice, transitions, grammar and punctuation.

If you don’t want to go as far as blindfolding yourself, setting a timer and challenging yourself to write a first draft as fast as possible can have a similar effect. It works for me.

Secondly, blindfolding allows you to picture the scenes you’re describing, seeing what your protagonist is seeing, feeling his emotions, and understanding what actions he’ll take. This helps you write more vividly.

It’s no surprise that Haruf is good at ‘show, don’t tell.’ Here’s how he describes a farmer checking whether a heifer is pregnant:

Meanwhile Harold had taken off his canvas jacket and pulled on an old orange sweatshirt that had one of its sleeves scissored off, and he had greased his bare arm with lubricant jelly. Now he stepped up behind the chute and twisted the heifer’s tail over her back. He fit his hand inside her and pawed out the loose green warm manure and shoved in deeper, feeling for a calf. His face was turned skyward against her flank, his eyes squinted shut in concentration. He could feel the round hard knot of the cervix, the larger swelling beyond. He rotated his hand over it. The bones were already forming. Yeah. She’s got one, he hollered to Raymond.

Haruf’s work is so imaginative, it feels like you’re watching a movie.

We might not have Haruf’s writing talent nor his huge empathy for his protagonists, but we can become better writers by using his technique. Instead of blindfolding yourself, try closing your eyes, and imagine your ideal reader. What are they doing? What are they feeling? What are they telling themselves?

When he gets home, carrying the paper, he sits down and starts writing his first Jack Reacher novel.

At that time, he doesn’t know the title—Killing Floor. He doesn’t know yet, this will be the first in a bestselling series and he doesn’t imagine Tom Cruise playing Reacher. Child doesn’t even know yet whether he’ll become a writer.

But he starts writing, with pencil, on the paper he has just purchased.

Exactly 20 years later, on September 1st, 2013, Lee Child sits down to start writing his 20th Jack Reacher book: Make Me. As Andy Martin reports in his book Reacher Said Nothing:

It had to be September 1. Every year. Without fail.

Some people thrive on an irregular publishing schedule.

But I’m guessing they’re a minority.

Most of us need to find our rhythm to write and keep writing. Knowing that I want to get my next post published in two weeks forces me to pick a topic, to start writing, and to finish a post, even when I feel like it’s going nowhere.

A regular schedule helps beat perfectionism, allowing us to say, it might not be perfect, but it’s good enough for today. Onwards to the next one.

Writing ritual #3. Have a cigarette (even if you don’t smoke)

Do you ever struggle to get in the mood for writing? You’d like to write, but somehow you can’t get started?

Perhaps you check your emails, scroll through your Twitter feed, and catch up on the latest news. You procrastinate, procrastinate, and procrastinate a little more until your motivation to write has completely evaporated. I know it because I’ve been there, too.

A tiny ritual can help you beat procrastination.

You’ve probably heard of pre-game rituals in sport. A tennis player who bounces the ball 11 times before each service. A baseball player tapping the home base three times. An athlete who listens to a specific rap song before each game.

Some say such rituals are superstitious. But they serve a real purpose: to trigger a state of intense focus so athletes can perform at the top of their game. Research in sports psychology suggests rituals boost confidence and improve motivation. When you feel anxious, a ritual can also calm you so you can focus on your next task.

Just like a ritual can help athletes focus, it can kick your brain into writing mode, too. Writing coach Natalie Goldberg describes her tiny writing ritual as follows:

When I sit down to write, often I have a cigarette hanging out of my mouth. If I’m in a café that has a “No Smoking” sign, then my cigarette is unlit. I don’t actually smoke anyway, so it doesn’t matter. The cigarette is a prop to help me dream into another world. It wouldn’t work so well if I ordinarily smoked. You need to do something you don’t usually do.

Goldberg likes to get away from home and write in a café or restaurant—to feel a “human connection.” But she doesn’t write in the same café every time as she likes changing the scenery. However, she always has an unlit cigarette in her mouth when she writes, even though she doesn’t smoke. That cigarette is her trigger to get into writing mode.

So, don’t wait for the perfect moment to start writing. Instead, establish a tiny ritual and kick your brain into writing mode, wherever you are at whatever time of the day.

Further reading:
How to get into your writing zone 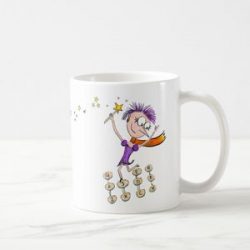 Get an enchanting writing mug instead.

Brew your favorite cup of coffee or tea, and let the Magic Creativity mug kick your brain get into writing gear.

(…) And while you can’t talk to a friend every time you experience that impostor syndrome, you can always look at the mug, read the words and remember Henneke’s many thoughtful posts on how you’re good enough, and that you should just take a deep breath and keep going.

Browse the full range of enchanting mugs on Zazzle:

What fuels your writing?

But if you wait with writing until you feel in the right mood, you’ll never get your writing done.

So, what could kickstart your writing?

A cup of your favorite drink to trigger your writing mode? A blindfold to stir your imagination? A timer to spur you on?

A cup of green tea or something stronger?

When you become a master in triggering your writing mode, you overcome procrastination, and you learn to write with more joy.

How to beat perfectionism in the writing process
29 articles on writing habits and productivity
Write It, Don’t Fight It (ecourse)